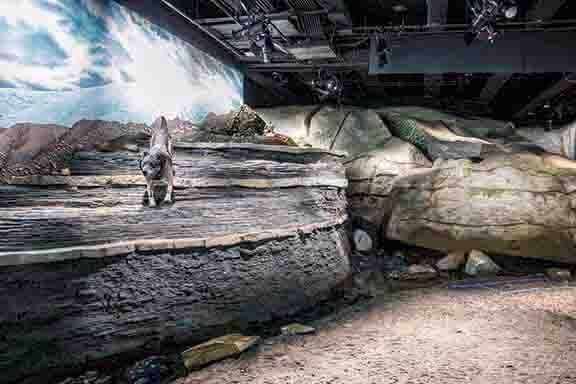 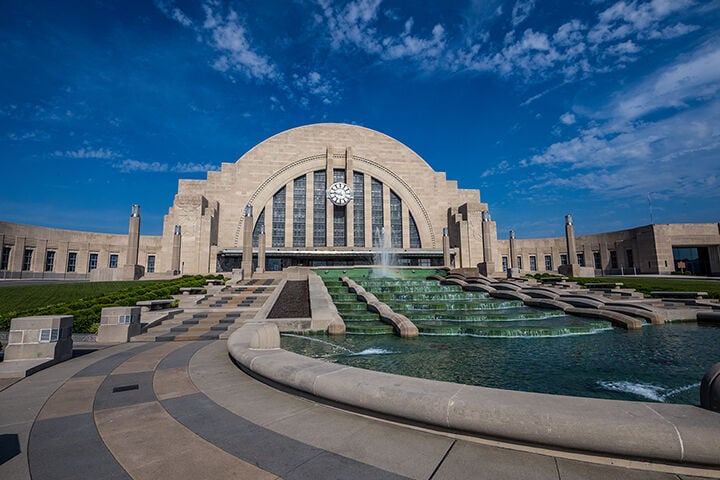 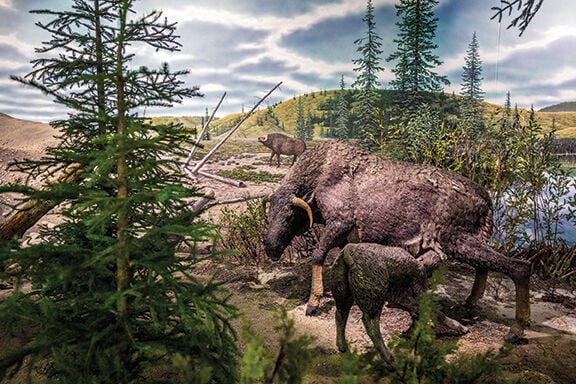 More than three decades ago, Cincinnati Museum Center opened the Ice Age Gallery, one of its first exhibits after the museum moved into Union Terminal. It was hugely popular and according to Whitney Owens, Chief Learning Officer at Cincinnati Museum Center, one of the most frequent questions visitors have posed through the years is, “When is the Ice Age trail coming back?”

Well, the wait is over because the much-anticipated exhibit returns on July 1, transporting guests back in time 15,000 years to the Pleistocene.

“It’s been a beloved exhibit over the years, and it’s great to have it come back with a fresh look,” says Glenn Storrs, Ph.D., Withrow Farny Curator of Paleontology at Cincinnati Museum Center.

Since its last unveiling, a good bit of advancement has been made in the museum’s science and knowledge of the late Pleistocene Ice Age. In addition, they have been able to utilize advanced technology as well as new types of lighting & sound effects. Plus, they are exhibiting a lot of original specimens from the museum’s collections, including fossils and modern zoological and botanical specimens, that have never been viewed before. One of the most exciting new displays is a spectacularly huge real mastodon skeleton, which was collected in 1980 from a bog in Indiana.

“We don’t often get the opportunity to bring something that big onto display,” says Owens.

“This is a big story to tell so it takes up an appropriately big footprint to go with it,” says Owens.

This exhibit highlights the Ice Age environments that shaped Cincinnati.

“In fact, the glacial geology process formed the Ohio River and determined the position of Cincinnati,” says Storrs.

Around Pleistocene times, just to the north of Cincinnati is where the northern glaciers stopped and to the south was warmer weather so the animals advanced across the land and then stopped here as it was a crossroads of these two different environments.

When visitors first step into the new entrance of this massive exhibit, they’ll see a huge wall-sized, time-lapsed projection that shows an animation of this area going back to the time of the Ice Age.

“You can see how the landscape has changed both in our region and, when you zoom out a bit, to see what it’s like for those glaciers to move across the landscape,” says Owens.

From there, visitors walk down a hallway and enter a new vantage point that communicates more recent research on the Pleistocene Ice Age and climate change, in general, throughout the Millennium. That’s the area that has the fully-articulated mastodon skeleton. This section of the exhibit includes some of the earlier research that describes how the Earth has changed over the ages. It also educates the public on how weather and climate are two different things.

“It’s about what we can learn from the Ice Age and how we can apply it to our climate as it continues to change now,” says Owens.

While natural climate change has certainly impacted the last 20,000 years in our region to the extent that a lot of the animals are extinct or have moved north and don’t live in this area anymore, there is a distinct difference between that and the human-caused climate crisis that we are undergoing now, and that knowledge is highlighted in this exhibit.

“Although we’re in a general long warming period interglacially through this natural cycle, the rate of change that we are experiencing now is a big difference that will cause many problems in the future, and we are certainly seeing some of the effects of that now,” says Storrs. “We want people to be hopeful about the future, but we also want them to recognize the seriousness of the situation and to really appreciate the differences between natural and manmade climate change.”

The piece of the exhibit that past visitors remember so fondly is the Ice Cave that has a waterfall in one corner.

That opens into the Ice Age Trail where visitors walk along with a recreated ancient environment during the Pleistocene Ice Age. The emergent environmental Ice Age Trail compresses 50 miles worth of geography from the glacial front down to Big Bone Lick and then provides a representation of the changing environments for ecosystems over that geography. It includes life-size models of giant bison, saber-toothed cats, the Jefferson ground sloth, and iconic dire wolves.

“It really feels like you’ve taken a walk very far back in time,” says Storrs. “People are really going to feel like they’re back in the Ice Age as they hear, see and smell what it was like in our region at that time.”

The first mastodon was originally discovered in 1739 in Big Bone Lick, Kentucky, just 20 miles south of Cincinnati, during a French military expedition. In 1807, the first organized excavation was conducted at Big Bone Lick by William Clark of Lewis & Clark expedition fame when he was sent by Thomas Jefferson to collect fossils. According to Storrs, when Clark was collecting these bones for Jefferson, he also collected Native American artifacts such as stone tools and spearpoints. These are the first paleo Indian points ever to be collected in America from this region and are part of the collection on display.

During the Ice Age, the Greater Cincinnati region was a crossroads for megafauna drawn to natural salt deposits in the area. When people first began collecting fossils at Big Bone Lick, there was a mythology surrounding the accumulation of animal bones that were found; folks assumed animals were attracted to the salt streams and got stuck in the bogs.

“While it’s true that animals were attracted to Big Bone Lick for the salt springs, we no longer think it’s true that they were mired in bogs,” says Storrs. “We think they were being trailed by Native American hunters because we have these spears points in association with these bones, and in some occasions cut marks on some of the bones, indicating that these animals were killed and butchered on-site.”

The exhibit reflects a newer understanding of how these fossils came to be.

Cincinnati Museum Center is still following CDC safety guidelines where COVID-19 is concerned. This means that some elements of the Ice Age exhibit like the interactive trail guide won’t come fully online until those restrictions are lifted. Nevertheless, this is still such an immersive experience even without those things. They have transitioned all of their touch screen contact into the Digimarc app that can be accessed through your phone. In addition, they have developed workarounds for the touchable mechanical interactives by using buttons that are activated by waving your hand over them.

“This exhibit is sure to evoke wonder, inspire delight and provide knowledge,” says Owens. “I think people will enjoy the ability to step back in time.”

Adds Storrs, “This is the premiere Ice Age exhibit in North America.”